Projects big and small accomplished in time for school

After an intensive effort over the holiday break, the Paynter Dixon education team worked diligently to deliver four key projects in time for the 2021 school year.

Projects ranged from minor classroom modifications to a multi-level construction.

General Manager of Education and Community Matthew Greene said after a ‘herculean effort’ the Paynter Dixon team delivered each of the projects with great success.

Mount St Benedict College at Pennant Hills called in Paynter Dixon to undertake urgent refurbishments before the start of the new school year after a major increase in enrolments.

“At Mount St Benedict’s we were presented with a significant amount of work which included the replacement of an entire roof, refurbishment of three classrooms and a new canteen,” Mr Greene said.

With students returning to school on the 27th of January there was no margin for error. 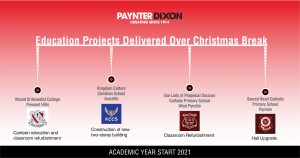 “Materials and labour over the Christmas period is always challenging,” Mr Greene said.

‘’But the scope of works that needed to be complete in the given time frame was the biggest hurdle.

“The school needed these extra rooms complete by the first day of term to facilitate – extra students so running late was not an option.

“Although a tight deadline was set, the level of trust that was built up over the last 16 years gave the client confidence in our commitment to deliver the design element.”

“We would like to counter the narrative that Paynter Dixon only does larger jobs,’’ Mr Greene said.

“The ability to think laterally and creatively allows us to complete projects of any scale and budget.”

Further south at Kingdom Culture Christian School, Paynter Dixon was engaged to build a new two-storey building that could accommodate growth in student numbers and is tailored to meet the school’s unique pedagogy.

Although the project commenced in February 2020, work was completed on-schedule in readiness for the new school year. (Photographed Above)

Paynter Dixon Executive Chairman James Boyd said the collaborative effort and determination from the team to work throughout the break was highly commendable.

“Working throughout the holiday period is no easy task but the team did an exceptional job in delivering quality projects to each client.”

“We pride ourselves on dependable results no matter the scale of the project.”