Harmonie German Club has appointed Paynter Dixon to develop a master plan for future growth of the Canberra based venue.

This will mark Paynter Dixon’s hospitality re-entry into ACT since the refurbishment of the West Belconnen Leagues Club twenty years ago.

The company provides design, construction and master planning solutions in multiple sectors with established offices in Sydney, Coffs Harbour and the ACT.

“I had the pleasure of being introduced to General Manager Paul Berger at the Clubs ACT membership lunch who then invited me to present a design concept to the Board,” Mr Fucile said.

Impressed with the design concept of the main bar, bistro and gaming area the club commissioned Paynter Dixon to draft the master plan.

“On this occasion we invited local firm Quattro Architecture to design the master plan requirements. Paynter Dixon utilise local consultants and trades where possible,” he added.

The popular social club has been a staple for Canberra’s German community since the 1960s even boasting a large piece of the Berlin Wall on site. 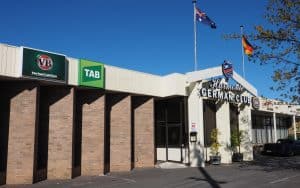 “They’re very proud of their Heritage but would like a modern German design rather than the traditional Bavarian beer hall cliché.”

Local clubs and pubs are now familiar with Paynter Dixon since establishing an office and recent success in the insurance sector.

“Since launching a Canberra office last year, we now have the ability to capitalise on more opportunities with new clients and qualify for government work,” Mr Cavallaro said.